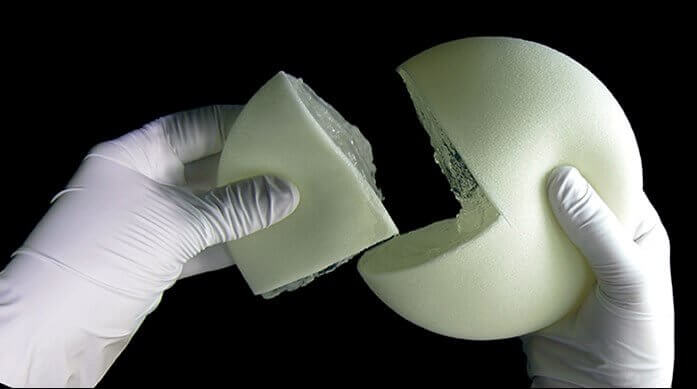 What is a capsule around a breast implant?

A capsule is the body’s own scar tissue and is a response to placement of a foreign body. Any implant once inserted will be walled off by scar tissue- the capsule. This varies in thickness depending on the body’s response to it which can change over time. The capsule may start out thin and change as the implant gets older to become thicker and more contracted.

What is a capsular contracture?

A capsular contracture occurs when the scar tissue or capsule around the implant becomes shortened or “contracted”. This shortening of the scar tissue compresses and distorts the shape of the implant. It can displace the implant causing it to sit higher and affect the cleavage lines. It can also start to feel significantly firmer than the other side.

With older implants, rates of capsular contracture were very high. Since the advent of newer devices in the last twenty years, rates have dropped significantly. It is still, however, the most common reason for implants needing to be replaced.

Capsular contracture is not dangerous, it can, however, be painful if it becomes severe. Early on, the implant is hard and starts to feel firmer. Over time this can progress to pain and tightness in the chest and surrounding areas.

It is difficult to predict who will get a capsular contracture. It is thought to be caused by a reaction to a low grade bacterial infection. Some cases occur spontaneously without a trigger. Known risk factors are infection, haematoma (blood collection at the time of operation) and previous radiation.

What is a capsulectomy?

This is removal of the capsule around the implant. Usually at least a partial capsulectomy is performed during an implant removal.

The extent of the capsulectomy that is clinically needed depends on the individual patient’s situation.

How can a capsulectomy be performed?

When is a capsulectomy not needed?

Sometimes the capsule is thin and filmy and only a few millimetres thick. If explantation is performed in this situation, there is no reason to take the capsule.

The majority of qualified plastic surgeons would agree it does not need to be removed in this situation. Thin capsules do not cause problems and aggressively trying to remove it may result in more pain, scarring, bleeding, damage to surrounding structures such as nerves and thinning of any remaining breast tissue.

The capsule in this situation is not toxic, does not harbour bacteria or other “nasties”. It is your body’s own response to a foreign body.

When is a capsulectomy necessary?

If it is very thick and firm, it can causes hardness of the breast and removing it is advantageous in this situation.

It is always necessary prior to placement of a new implant to take the majority of the capsule to ensure the new implant has a fresh surface to adhere to.

Is removal of the entire capsule necessary in this situation?

In some areas the capsule may be stuck to ribs, muscle, extend high into the armpit, or be too close to the skin to allow safe removal. Leaving a small amount of capsule in these areas is not dangerous if the judgement if made that taking it could cause more harm.

If the capsule is causing stiffness and hardening of the breast and surrounding tissues or if it calcified, then all safely accessible parts of the capsule should be removed.

To emphasise, this is a very different situation to the capsule seen around an implant that does not have capsular contracture.

Is the capsule always sent off?

All pieces of capsule are sent off to histopathology when Dr Simone performs a removal of breast implants.

When is en bloc capsulectomy necessary?

En bloc capsulectomy is currently a technique about which there is much misinformation. This is a explantation technique that involves removing the breast implant and surrounding capsule of scar tissue in one single piece. This is a useful method if the implant is known to be ruptured and leaking, very calcified or if there is the rare case of BIA-ALCL. In all other cases this is actually a worse option.

The technique requires a much larger incision to gain adequate access to all parts of the capsule, usually around 10cm compared to the usual 5cm to insert a breast implant.

There is no such thing as an “en bloc expert”. Every trained plastic surgeon can do one and remove your implant through a large hole. It is just a lot of us don’t believe in scarring and deforming a breast for no good scientific reason.

A complete removal of the capsule can be achieved through almost the same size incision as your original incision if it is in the inframammary (breast crease) position. It is more precise to open the capsule and take out the implant which allows better access and visualisation to parts of the capsule that are otherwise much more difficult to access with the implant in place.

Remember, a capsule is your own scar tissue.

If it is not very thick, calcified and if you do not have clear signs of the very rare BIA-ALCL  there is absolutely no need for an aggressive capsulectomy or en bloc capsulectomy. All this is doing is scarring your breast potentially more than the original capsule and also thinning what is often minimal remaining breast tissue. It creates a longer scar on the outside as well as scarring on the inside.

Removing your own scar tissue brings in exactly the same cells that caused the initial capsule so it is an entirely pointless exercise if it is not necessary.

The theory that en bloc somehow removes all silicon from the body is not true. Silicon if it has leaked can spread elsewhere and aggressively taking the entire capsule does not guarantee the silicon is not in the remaining normal looking tissues if that is the concern. Modern cohesive gel implants leak in extremely rare cases as they have the consistency of a jelly baby.

There is no one technique of capsulectomy and breast implant removal.

Therefore the amount of capsule that needs to be removed during a breast implant explantation should be assessed in each individual situation as it varies from case to case. It is often an intra operative decision as imaging and examination does not always predict exactly what will be found once the breast is opened up. You should trust your plastic surgeon and their experience to know which parts of the capsule are essential to remove and which ones are safer to leave behind.